A Cold Night Out 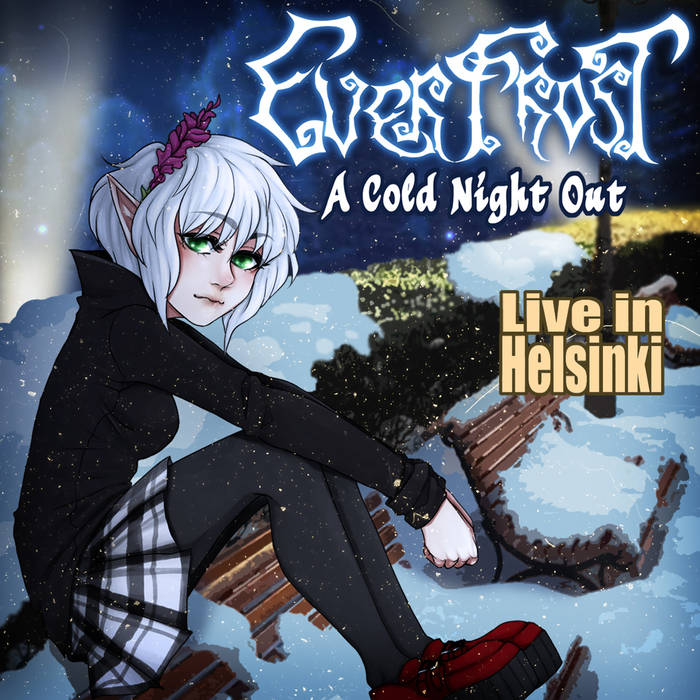 Everfrost present their very first LIVE release, 'A Cold Night Out,' a feature video and selection of songs from their show at The Circus, Helsinki on their 'Cold Nights' Finnish tour.

A Cold Night Out was recorded and filmed live on 14th of March, 2018 and was then mixed and mastered by Benji Connelly at Duskswitch in April 2018. The show was proshot and edited by S.KÄRT, and the cover art features character artwork by qhostkid, as well as background work by Michiru Bokido and Benji Connelly. The bonus feature 'Backstage Access' was filmed by the band from summer 2017 - spring 2018 and edited by Joonas James Salminen.

All songs performed by Everfrost

Track Name: Hemlock (Live)
Every night the weight of your words
Controlling the weak
It’s the kind you can’t withstand
It’s the lies you wear on your sleeve
You believe the fear in their eyes
Relieve the thirst
But the ghosts still gather the poison
‘Cause they know you’re already cursed

Young hearts, out our minds
Runnin' till we outta time
Wild childs, lookin' good
Livin' hard just like we should
Don't care whose watching when we tearing it up
That magic that we got nobody can touch

Looking for some trouble tonight
Take my hand, I'll show you the wild side
Like it's the last night of our lives
We'll keep dancing till we die

Young hunks, taking shots
Stripping down to dirty socks
Music up, gettin' hot
Kiss me, give me all you've got
It's pretty obvious that you've got a crush
That magic in your pants, it's making me blush

I hear your heart beat to the beat of the drums
Oh, what a shame that you came here with someone
So while you're here in our arms,
Let's make the most of the night like we're gonna die young

Paranoia rapes my ringing head
My bleeding heart been used as a sled
The wilderness cries, the pendulum flies
Swung out of time with the clockwork rhyme

As the clock counts down
And the church begins to chime
Those hands slow down
And it’s hard to tell the time
Now I swing to and fro
In this winter wonderland
But the eyes you see
Stare frozen back at thee
So free
Track Name: Three Tier Terror (Live)
Break the candles out
Light the void within this lantern
The grace, the creed
Tears apart this tapestry
With all the memories
Lost in the clouded seas

Rip the carpet up
Throw the table down the stairway
I missed the show
I demand an instant replay!

Can’t feel emotion today, undone
Using yesterday to shield out the sun
I hide my broken Blue Eyes
The world around me dies
And I fade away

On that night you slept away, still alive
You can’t wake until your kin have arrived

RECITE YOUR FINAL LINE
ROTTING APPARATUS
IN THE VALES FAR BEHIND
AS YOU CLIMB THEY SWAY
FROM THE LEVEL
CRYING AS THE TOWER
CRAVES YOUR TERROR
IF YOUR HEART BEARS MISERY
AND THE RAPTURE CALLS YOU
TO A WORLD YOU CAN’T BELIEVE
WOULD YOU CLIMB AND FACE THE TERROR
KNOWING THAT THE CURSE WILL LAST
FOREVER!

Featuring Gary Bartz, 5 years of Rhythm Section Intl and an LP of the week by Nicolas Jaar